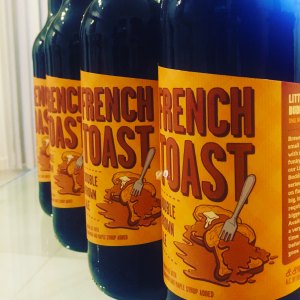 When it comes to beer, it seems that local giant Funky Buddha Brewery can’t do no wrong, and such was the case with the recent release of their acclaimed double brown ale, French Toast. With an ABV of almost 9%, an IBU of 35, and 91 Beer Advocate score, this has rapidly become one of the favorite beers among beer lovers due to its intoxicating aroma and delectable taste. From the moment you get in proximity of the bottle, the sweet maple scent can be smelled, and as its poured in the glass, the cinnamon, vanilla and nutmeg hits your nose and its immediately breakfast time again.

However, the greatness of this beer does not stop in its aroma, but it continues to flow with it’s taste since it truly does justice to its name. The flavors that make up a homemade French Toast all come together with this beer since you can taste the brown sugar, heavy maple syrup, spices and even the bread and egg custard with each sip you take of it. The caramel and brown malts allow for a subtle bitterness to be present at the end, and its mouthfeel is certainly a medium body with a moderate carbonation.

While this beer is a brown ale, it is without a doubt a very thick and sticky version of it, which almost resembles a stout or a porter. This is an easy and fun brew to drink that can be paired with cheeses like Asiago, Cheshire, Sharp Cheddar or Gouda (I mean what doesn’t pair well with cheese?) along with some hearty meats like BBQ brisket, Polish Kielbasa and Grilled Flank steak. Overall, this beer was beyond what I expected, and while I have tried it in the past this particular batch gave the meaning of “Breakfast in a Cup” to the max.

Its flavors and smells created a beautiful explosion of breakfast goodness that simply made me wish I had an unlimited supply of it. While the released bottles are already gone with the wind, the brewery still has plenty on tap; so if you live in the South Florida area and you haven’t tried French Toast yet, or simply need to feed the addiction, head over there now!

I visited @thecandytopia on my recent trip to NYC and I had a blast! Each room has a different theme and every single sculpture from big to small is made with candy. It was specially cool seeing figures like Cardi B and Snoop Dog made from candy 🍭
Give a girl a pair of pretty sneakers and she can conquer the world! 👟
Hello friends! 😊
Thank you 2022 for all the adventures, lessons and the gift of life! I’m ready to take everything 2023 brings and I wish all of your dreams come true next year!
Velvet is one of my favorite fabrics to wear when the temperature drops. It’s natural shine provides a level of elegance, regardless of what you wear it with 😎
The best view of 2022 was hands down flying over the Teotihuacan Pyramids in a hot air balloon thanks to @nuevocielomx 🎈